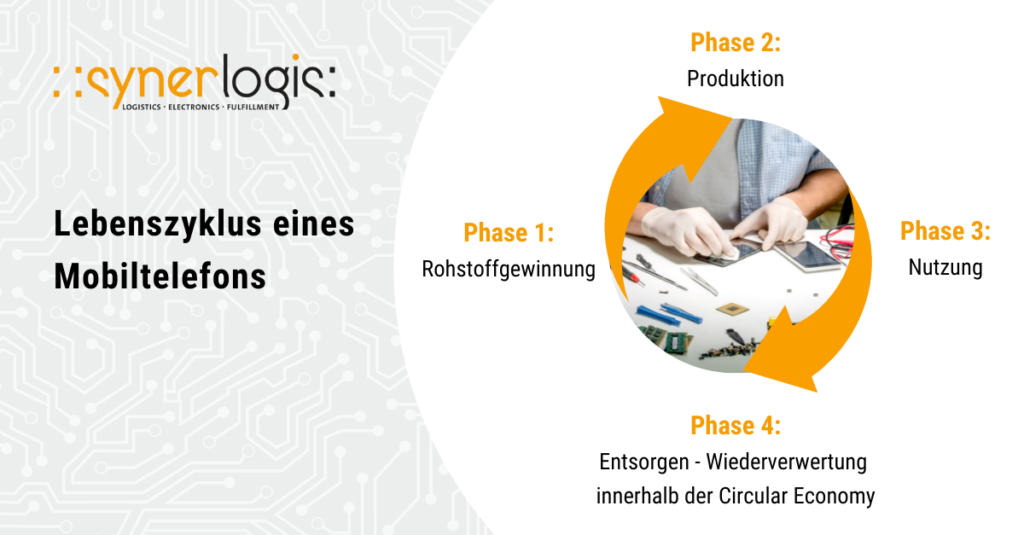 The product life cycle of a cell phone

There are about 60 different substances in a smartphone. Of these, about 56% are various plastics and 30% are various metals, with copper and various precious metals making up the largest portion here. These precious metals are mainly extracted in mines in developing countries such as the Congo or South Africa. During the extraction of the metals, not only raw materials are extracted, but also various environmentally harmful substances are released, which end up in the groundwater.

In order to produce the chips and circuit boards that are used in every mobile device, a very high and costly expenditure of resources and energy is required. Transportation from the mines to the production site as well as to the sales site also generates high levels of greenhouse emissions.

Even once the cell phone has reached the end user, there is no end to the consumption of raw materials. After all, every device requires electricity for use. But that’s not the only thing that indirectly consumes raw materials. Because the construction of the radio masts requires a lot of energy and raw materials due to the size and weight of the individual parts.

Once the cell phone has reached the end of its life cycle, it should ideally be taken to the appropriate return facilities to be recycled. In order to recycle as much of a device’s materials as possible, many companies, like us, work according to the Circular Economy principle. The Circular Economy replaces production with sufficiency: reuse what can be reused, recycle what cannot be reused, repair what is broken, recover what cannot be repaired.

The goal is to keep the various resources in the cycle for as long a period of use as possible. In doing so, the materials should be used for multiple purposes and returned to the cycle as often as possible. This results in less waste and minimizes the depletion of fossil resources.

However, not all materials can be recovered in their purest form. For example, aluminum ends up in slag – a secondary raw material that can be added to cement, among other things.

Even though the entire process of reprocessing and recycling requires a great deal of energy, it is still good for the environment. This is because it is the only way to recycle the materials that are difficult to break down instead of ending up in the environment.

In summary, a high amount of resources and energy is consumed over the entire life cycle of a cell phone. For example, a cell phone weighing about 80 grams has an ecological backpack of about 75 kilograms. This backpack is consequently a thousand times heavier than the device itself.

It is therefore important to recycle cell phones and electronic devices of all kinds as much as possible in order to relieve the environment at least somewhat.